I've been testing out flavor combinations lately—in preparation for the not-so-soon grand opening of my cupcake bakery. It'll happen one day. But for now, I'll just concentrate on creating and perfecting out-of-this-world cupcakes. 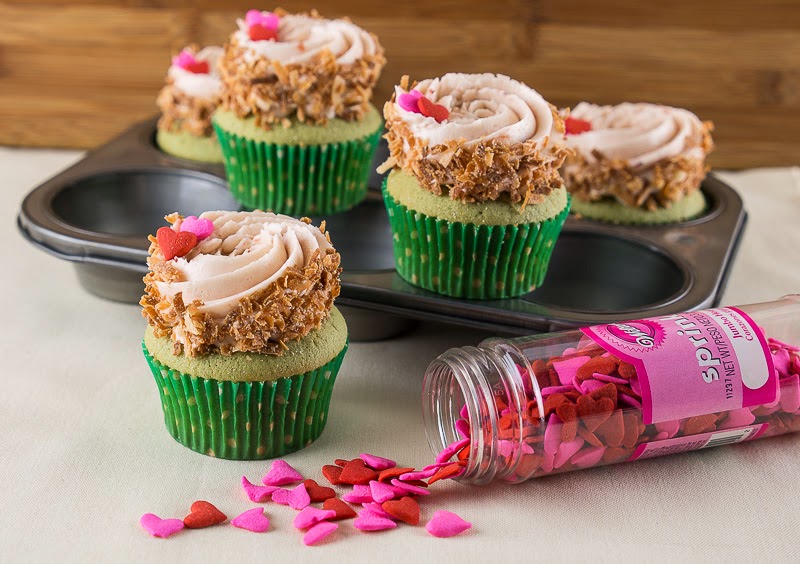 I contemplated for a while what kind of buttercream I wanted to use for these cakes. At first, I was going to just go for a simple American buttercream. However, I realized that it would be too dense and way too sweet for the matcha. I also thought of a french buttercream, but thought that it would be too rich and buttery. My final decision was a swiss meringue because of it's lightness and smooth texture. Swiss meringue buttercream also isn't very sweet and allows other flavors to shine through. 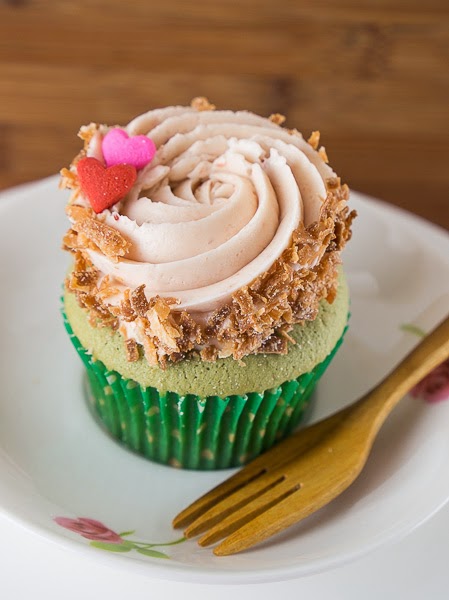 Taste: I used two tablespoons of matcha, so the flavor really comes through, even with all the other components. The buttercream has a very nice strawberry flavor and isn't too sweet.
Texture: The toasted coconut rim makes all the difference. It adds a wonderful crunch and is slightly smoky. The cake itself is very moist and fluffy. The buttercream melts in your mouth and is so light and airy.
Appearance: See for yourself! Aren't these cupcakes just the cutest? I love the contrast of the light pink against the earthy green. These cupcakes kind of remind me of bird's nests.
Level of difficulty: This is a fairly simple recipe. As with all my recipes that include swiss meringue, the only "difficult" part would be the time it takes to make the buttercream.

In the bowl of a stand mixer, fitted with the paddle attachment, beat the butter and sugar until pale and creamy, about 5 minutes. Then add the eggs and vanilla and beat on medium-high speed, until it is well combined.

In a small bowl, sift the flour, baking powder, salt, and matcha powder. Alternate adding the flour mixture with the milk, beginning and ending with the flour. Mix until all the ingredients are combined. Be sure not to overmix!

Fill the liners until 2/3 full. Bake the cakes for 17-20 minutes, or until a toothpick comes out clean when inserted. Make sure to rotate the pan halfway through the baking process to ensure even cakes. 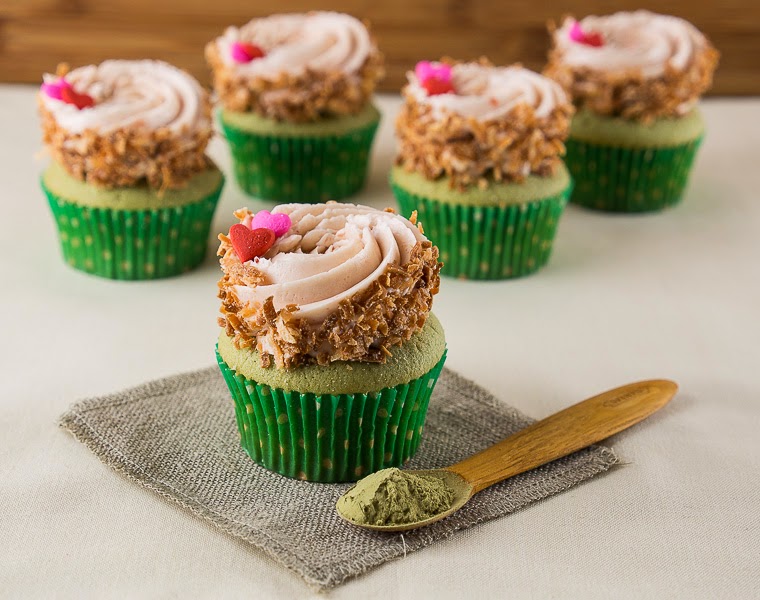 Once cooled, break up the coconut using your hands. You want the pieces to be small.

Slightly whisk the egg whites and sugar in a small bowl and place it over simmering water. Make sure the bowl does not touch the water. Heat mixture to 160°F, whisking constantly.
Transfer the mixture to the bowl of a stand mixer fitted with a whisk attachment and beat on medium high speed until the mixture doubles in volume and forms stiff peaks. This will take about 10-12 minutes.
Once the mixture has doubled in volume and is cooled down, slowly add the butter in one piece at a time, mixing to incorporate after each addition. At first, the mixture will look curdled. Don't worry, this is normal. Just keep mixing and it will become smooth and creamy. Once it has all come together, add in the vanilla extract and strawberry preserves. Mix until fully incorporated.

Assembly:
Hollow out the cupcakes using an apple corer or knife. (Or any tool you prefer.) Add about 1 ½ tsp of strawberry preserves into the center. Pipe the buttercream onto the cupcake. I like to use an Ateco#827 tip. Put enough coconut to fill the cup of your palm and cover the outside of the buttercream. Let the excess fall off. 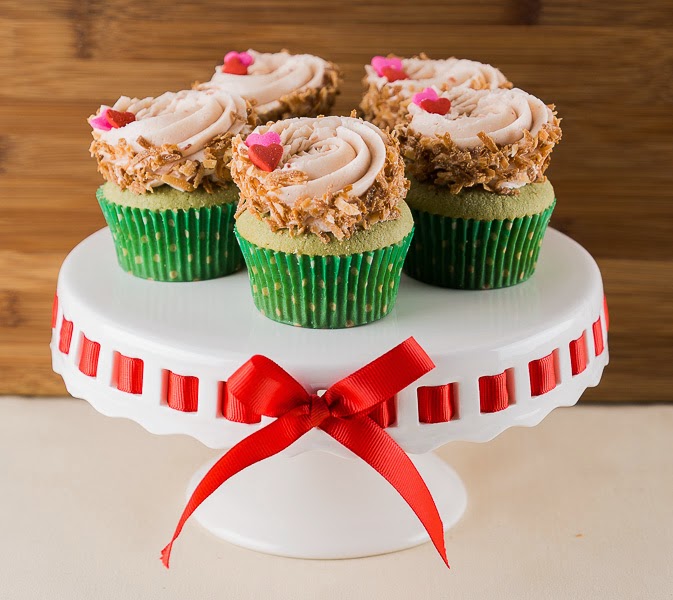 These cupcakes are so delicious that my mom, who isn't even a big fan of sweets, couldn't resist inhaling an entire cupcake after dinner. She was instantly hooked. Like I said, the cake isn't very sweet and pairs wonderfully with the slightly sweeter strawberry buttercream. The toasted coconut ties the entire cake together. It's the perfect cupcake! The addition of the heart sprinkles makes it the perfect Valentine treat as well. So be sure to makes these for the special person(s) in your life :)

Kelly M
My name is Kelly. I'm from New York. Baking/cooking has been my passion since I was in the fourth grade. I try to bake/cook any chance I can get. There's nothing more satisfying, in my opinion, than seeing the joy on people's faces when they try my food. I love it. I hope to one day attend a culinary school to further improve my skills. But as of now, I just try my best to make people happy. :D